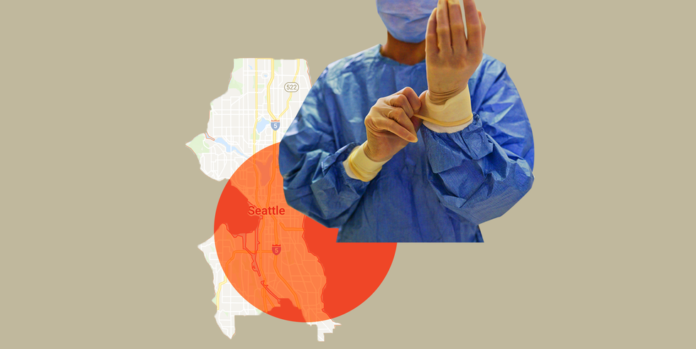 Until last week, I always stopped at a coffee shop on my way to the train that I take to work at a clinic in downtown Seattle where I’m a nurse. Recently, as the coronavirus pandemic spread throughout our city and the rest of the United States, the number of customers kept dwindling until it was just the barista and me, standing six feet from each other across the bar. I asked how business had been, and we laughed. She said she liked my orange nail polish. I looked down, embarrassed and remembered that chipped nail polish can be a reservoir for germs.

The first confirmed case of COVID-19 in the United States was found in January: a middle-aged man near Seattle, not far from our clinic. When I heard, I admit I felt a sort of weird thrill, kind of like having a famous friend, except it’s a stranger with a viral respiratory illness who lives 40 miles away. The man recovered without incident.

For a little while after that, there were no new cases in the area, as far as we knew. The nurses at my clinic, where most of our clients are unsheltered and chronically ill, acted like we were competing to see who could be the most chill about an epidemic.

We had no idea it would get this bad.

My boyfriend texted me that he wished I wouldn’t act so dismissive of his pleas to “be careful.” We got into a daylong fight about which one of us was the correct amount of worried.

But on the last day of February, a resident at a nearby nursing home became the first U.S. death from coronavirus. This was followed by news that the virus had likely been spreading in the community for a while. I still wasn’t particularly worried. People die from the flu all the time, I thought.

I went about normal life. I tried to get my eyebrows waxed, but the receptionist at the salon said they weren’t doing eyebrows “because of the virus.” The place down the street was though, pandemic be damned, so I went over there. I laid back on the table as the aesthetician bent over to apply the wax, her face inches from mine. When she finished, I handed her my cash in the empty salon, feeling guilty like I had just bought drugs.

Unless I get ill, there is no scenario where I’m able to stop going to work. I have to. It's my job.

My boyfriend stopped going into the public relations agency where he works and started spending his days at his computer in our living room crafting COVID-related messaging for various local clients.

At the clinic, we learned that a couple of coworkers would be out “indefinitely.” Despite what we were being told, not nearly enough people were getting tested. Schools closed. Coffee shops stayed open.

More clients began reporting fever and cough. Most of the people we see are homeless, and it’s hard to quarantine in a shelter where 100 people sleep in the same room. I heard that when a man staying at a local shelter tested positive, they isolated him by making him stand outside on the patio.

At this point, our supervisors began locking the extra hand sanitizer in the nursing office. We’re allowed to dispense one small bottle to each employee at a time. We’re told that the order to get more fell through. We’re told there’s no point in trying to order more masks.

By March 12, 23 of the residents at that nearby nursing home were dead. I tried to imagine what it would be like if 23 people I knew died in less than two weeks. I couldn’t. It’s unfathomable.

Over the weekend, Washington Governor Jay Inslee closed all bars, gyms, and movie theaters and made restaurants take-out only. Groups of more than 50 people can’t meet. Yet, even though most of the city is staying inside, I keep going to work, seeing sick people, and using my tiny amount of hand sanitizer. Unless I get ill, there is no scenario where I’m able to stop going to work. I have to. It’s my job.

I still wasn’t particularly worried; people die from the flu all the time, I thought.

I wash my hands with soap and water. I see my clients. I take temperatures and wear gloves. And on Monday morning, when I walked past the coffee shop, I didn’t go in. Instead, I felt self-conscious about the times I gave the barista my credit card and how our fingers almost touched when she handed me my cup. I worry she thought I didn’t care about her health.

I finally realize that the reason I’m supposed to be careful isn’t because COVID-19 will kill me, but because I could get it and kill somebody else.

No Safe Place on Land: Black Women and the Solace in Surfing

17 Parent-Approved Gifts For a One-Year-Old

13 Gift Ideas For People Who Like Dogs More Than Humans